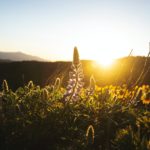 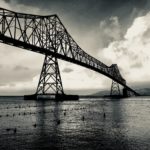 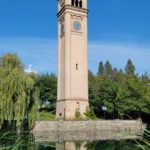 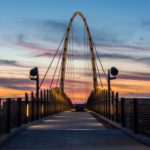 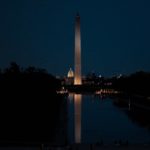 Join us on the first ever Brand g Vacations domestic USA adventure as we team up with American Queen Voyages to charter their river ship, American Empress exclusively for our Brand g guests. This remarkable vessel has been exquisitely designed to bring today’s discerning travelers extraordinary American river experiences.

Embark on a divine adventure through the splendor of the Pacific Northwest on a Columbia and Snake River cruise. Observe the landscapes change from majestic walls of spruce and pine to rolling hills dotted with vineyards from the luxury of your private veranda onboard the American Empress. Immerse yourself in the breathtaking scenery, retrace the expedition path of Lewis and Clark, and indulge in the finest wines and freshest seafood Oregon and Washington have to offer. This Columbia and Snake River cruise presents an unparalleled depth of Native American history and culture for river farers to dive into and create lifelong memories.

Laugh. Dance. Smile. Relax on this unforgettable adventure of the senses.

Inspired by America’s Pacific Northwest, our menus showcase the region’s varied cultural and culinary influences. Savor each succulent bite, swirl and sip amidst the rich ambiance of the Astoria Dining Room.

From lively performances to stimulating lectures with our knowledgeable historians or Riverlorians, you will find a pastime on the ship that suits your passion.

The American Empress has every amenity to help you unwind entirely — luxurious modern amenities, gracious service, and endless authentic experiences that await you.

There are currently no extensions for this trip. 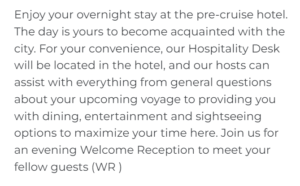 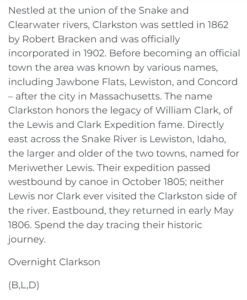 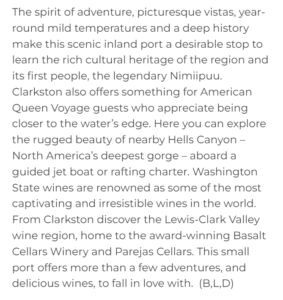 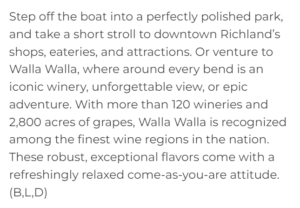 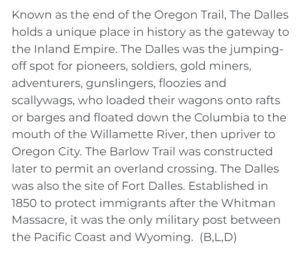 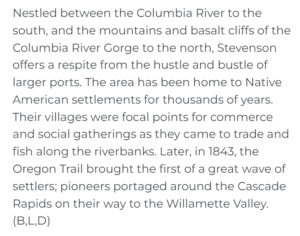 Camas and Washougal are located side-by-side on the banks of the Columbia River. Part of the Portland-Vancouver metropolitan area, this community serves as the “Gateway to the Gorge.” A highlight to a visit here is a drive through the Columbia River Gorge, the largest national scenic area in the United States. Up to 4,000 feet deep, the Gorge stretches for more than 80 miles as the Columbia River winds westward through the Cascade Range, forming the boundary between the State of Washington to the north and Oregon to the south. Three volcanoes dominate the Cascades and are major attractions when visiting the Gorge. Majestic Mt. Hood is the highest point in Oregon. It is one of the three dormant volcanoes in this region, with Mt. Adams and Mt. St. Helens located across the river in Washington state. The western Gorge, with an average annual rainfall of 75 inches, is lush and green with misty mountains, old growth forest and over 40 plus waterfalls. The eastern Gorge, with an annual rainfall of less than 15 inches, is a region of rocky bluffs, rolling hills, desert wildflowers and wide, open spaces.

In downtown Camas, the older buildings have been preserved and are utilized by businesses to make this a bustling community center. Trees and planters line the streets make the downtown mall an appealing place to visit and shop. The Port of Camas/Washougal and Parker’s Landing Historical Park may very well be sitting atop the birthplace of Washougal, which features a trendy downtown that has been totally revitalized. (B,L,D)

Surrounded by forests, boasting three rivers and situated a stone’s throw away from the Pacific, Astoria is a picturesque port city with Victorian-era homes etched into hills overlooking the Columbia River. Astoria is known to be the oldest American settlement west of the Rocky Mountains, inhabited for thousands of years by the Clatsop Tribe. Astoria has a rich history that reflects the many influences the town has had from people and cultures around the world. Many of its current residents are descendants from early settlers, many of whom were Chinese and played a significant role in Astoria’s history especially in the canneries, railroads, and the jetties at the Columbia River. The Garden of Surging Waves is a beautiful park that celebrates and honors Astoria’s relationship with China over the years. The Astoria Riverwalk is the lifeblood of the city and the best way to get a feel for the city spirit.

Perhaps start your exploration at the Port of Astoria with hundreds of ships from all over the world. Walk under the 4.1-mile-long Astoria-Megler Bridge, enjoy the spectacular views of the river, check out the Maritime Memorial, visit one of the many nearby shipwrecks, learn about life on the Columbia at the Columbia River Maritime Museum, and enjoy the lounging sea lions on the docks at 36th Street. Alternatively, you can climb to the top of the Astoria Column – wrapped in depictions of history – look out over the landscape toward the Pacific Ocean and watch your model wooden airplane glide through the air to its rest below. (B,L,D)

As your journey concludes, there are other opportunities for you to take in the town — whether it’s an optional premier post-cruise  hotel* or a quick transfer to the airport for your final trip home — your Brand g  vacations team can pre-arrange everything for you.  (B,L,D)

*Post trip options coming soon and will be added to the Optional Add-ons page, once available.

Packages for 2024 Columbia River, USA range from $5,999 Staterooms to $9,999 Suites. Please contact us directly at alan@conciergetravel.cc or +17132530041 for real-time availability of spaces and bookings.

Enhance the Experience We have been booking with Concierge Travel for many years. They provide access to all of the Gay Travel products available and are able to provide advice on which type of travel or specific trips will meet our needs. Concierge team members often join us on the trip and provide a few little extras to enhance the experience. We would never consider using anyone else.

We have been booking with Concierge Travel for many years. They provide access to all of the Gay Travel products available and are able to provide advice on which type of travel or specific trips will meet our needs. Concierge team members often join us on the trip and provide a few little extras to enhance the experience. We would never consider using anyone else.

We're still the One!

Cruising takes the guess work out of travel...
Discover more